5 tips on evacuation management – by a lecturer fire prevention 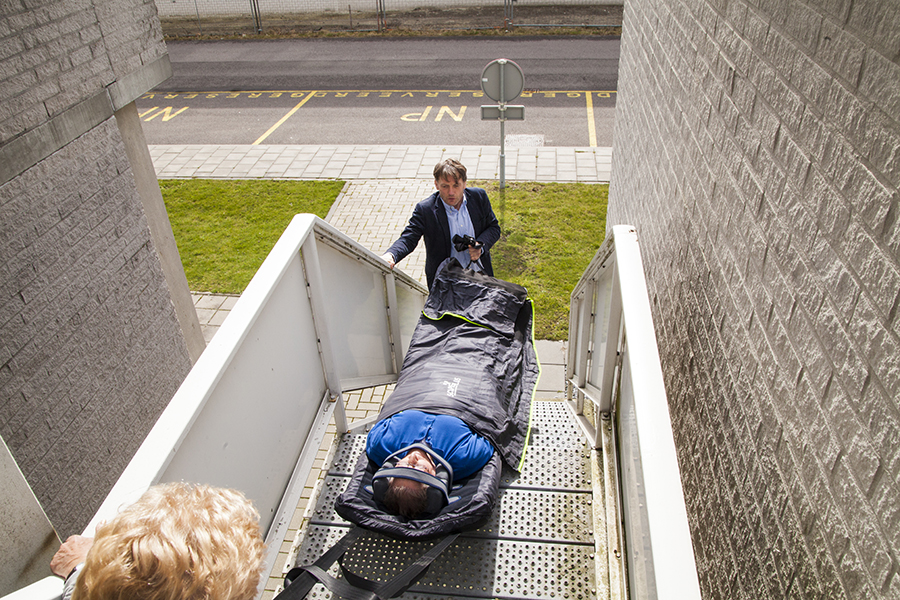 “When there is a fire, the fire brigade is going to evacuate”. Some safety managers and fire wardens work according to this strategy. There seems to be some confusion amongst fire wardens about evacuations and the role that the fire brigade plays during an evacuation. The fire brigade does acknowledge that these people play a crucial role during the first minutes of an emergency. Who better than René Hagen, lecturer in fire safety & prevention at the Netherlands Fire Service, to answer important questions around this topic.

We spoke to René Hagen on the phone and had a conversation with him about evacuating healthcare institutions.

From this interview, we have drafted 5 tips that could be useful for you:

During an emergency, any fire wardens and other staff (e.g. nurses) need to get a head start before the fire brigade gets there. Why? It takes the fire brigade about 8 minutes to reach the scene (average time in The Netherlands). They cannot start working as soon as they arrive. They need to assess the situation. This assessment takes time as well, roughly 7 minutes. All in all it will take about 15 minutes before the fire brigade takes action. Fire wardens should not wait that long. Smoke and/or fire can surround you within minutes. There is no time to wait for the fire brigade. By starting the evacuation immediately, after alerting the fire brigade, you can save lives. It is important for this to be included in the general emergency plan.

2. Be aware of cold smoke

There is a big difference between smoke-resistant and fire-resistant doors. Buildings are legally obliged to have fire barriers. These barriers can stop fire and smoke for roughly 45 minutes. However, this is only the case when the smoke has reached a certain temperature. Cold smoke can penetrate anything.

Among other things, this is due to the fact that small openings around for example doors are only closed (foaming materials) at high temperatures (above 200 degrees). This means that at the beginning of a fire the partition will let through more smoke than you would expect based on the fire resistance. If the temperature of the smoke stays below 200 degrees the fire resistant partition has a low smoke resistance. The smoke below 200 degrees is called ‘cold smoke’ in Dutch jargon.

Also some fires produce more smoke than others. It can go through doors and cracks, so hallways and escape routes might be covered with smoke anyway. Even when you start evacuating to behind the evacuation barrier (the first compartment) there is always the possibility that you might need to evacuate that section as well due to cold smoke. So make sure you are prepared for the next step of the evacuation.

3. Make sure the emergency response officer can work in a safe area

Some emergency service officers might learn to wear breathing protection, so they can also function around smoke. The problem is that they often don’t know what the risks are. There is a risk of the fire spreading, of smoke explosions, extreme heat and all kinds of other phenomena. For these types of situations, you really need a trained fire fighter. That is why the fire brigade’s advice is: ‘A fire warden or staff that is assisting during the rescue should work in a safe area. That’s an area where there is little to no smoke.’

4. Be careful of smoke inhalation

Generally it is smoke inhalation that gets most victims. With older people what sometimes happens is that the fire arises close to the body. This can happen, for example, because of cooking or smoking in bed. This causes direct burns. Unfortunately it is generally smoke inhalation that causes casualties. Smoke inhalation leads a person to ingest too much carbon monoxide.

5. Look at every situation from different angles

Every situation is different, so the priorities are different as well. The fire brigade’s motto is: ‘Save first, extinguish later.’ That is still the general rule. Sometimes, however, it is better to extinguish first. Sometimes that’s faster, and then the firemen can start ventilating. Putting out the fire and ventilating can save a lot of grief sometimes. In situations like this, ‘evacuating people first’ would have cost more time. Eventually the goal is to get the people that are around or close to the fire, out of the smoke as quickly as possible. The fastest way to do that can differ. It is a difficult decision to make for the fire brigade, but also for any emergency service officers or staff on the ground. Should an emergency service officer close the door to the fire to prevent smoke spreading and should they then evacuate people from other rooms? Or should they choose to do something about the fire itself? Better training is needed for these situations.